As the longest week of my life draws to a close, things are shaping up to be pretty similar next week. In that regard, I regretfully have to inform you that there will be no Wednesday updates anymore. Oh, it was always a pipe dream, I could never keep up! That and we’re tearing through comics at a fierce rate these days, aren’t we? So from now on, let’s keep it simple. One comic, one update, one week. Sounds simple enough, doesn’t it? Anywho, onwards and upwards with the review! I’ve alluded to reviewing this comic in the past, but now, John Connor, it is time!

Housepets! by Rick Griffin was cyberspace-worthy in June of ’08. This is not his first comic though, no. His first comic was In the New Age over on comicgenesis, his unique style still shining through. You can see the differences between In the New Age and Housepets! pretty easily. As you’ll see on the site, he’s been working on Housepets! for a while, developing his artistic talents to suit the characters (the great many there are), as well as working on the setting and the characters' personas for quite a long time beforehand. [Editor's Note: Rick tells me this was while he was waiting to get a tablet PC, but where some people would sit with their thumb up their ass doing nothing, he actually planned a fair bit. Good for you, Ricky!]. And by golly, it sure paid off! Wow, where do you begin with something this good? This comic ticks all the boxes that constitute a solid, funny, story-based strip. This is newspaper worthy. And not some cheap tabloid rag that’s used to wrap fish, no sir! But the fancy newspapers, that are read by the middle-class gentleman with a fountain-pen in one hand and a beer in the other. Housepets! primarily follows the tale of Grape and Peanut, the pet cat and dog (respectively) of the Sandwich family, as well as the various intertwining stories of the other pets in the neighbourhood. It’s like a sit-com about pets! Only better, ‘cos it doesn’t suck like a sit-com about pets would! Of course, all the little pets are anthropomorphisms of the actual animal, but I doubt it’s what you’d call a “Furry” comic. Those things are strange. It’s more like VG Cats in that respect, in that they’re animals, but can talk and act like people. Though in the Housepets! universe, the pets are treated more like kids than pets… Mostly.

The writing is great. I’ve seen better, I’ll admit, but the key component here is the artwork synergising with the writing. See how I use a fancy word? But man can’t live on words alone, there’s gotta be humour. Manys a sight gag, especially in the early comics and one-offs, will have you lol-ing with the best of them. The humour is pretty PG, and is kinda reminiscent of Calvin and Hobbes at times, which is always nice to see. I’m a firm believer in not having to revert to base humour such as cussin’ and the like, though it can work well, depending on what the comic is and how it’s delivered. Housepets! doesn’t really get the opportunity for awful language anyway, and uses situational and character driven humour to great effect. Which leads me nicely onto the characters themselves! There are quite a few, we’re introduced to all of them as stories progress, though combined with the uniqueness of their design, it’s easy enough to tell them apart. As I said before, Rick has been working on this long before starting it on the interwebs. He gets the characters and their various qualities across very naturally, and their development is equally impressive.

I should mention the artwork. Again: he’s been figuring this out for a while, not just in his head, but on the sketch pad too. It visibly shows. Like I said, there are differences between his old comic and this, notably in the characters' eyes. But the quality of his drawings are consistenly good. Looking at it, you’d think that Housepets! has been going for years, and it does take years for some artists to reach that level of comfort and consistency with their work. It’s truly wonderful to behold. The things I love most about this comic are the facial expressions. They’re very well done. And because we’re dealing with little kitties and doggies, we’re dealing with intense amounts of cuteness. I haven’t seen creatures this cute since I attended the Sixth Annual Miss Cute competition sponsored by Tiny Woodland Creatures Ltd. and The Boxes o’ Foxes Fine Fuzzy Faux Foot-Warmers collection. That’s why I fell in love with this comic anyway. I can’t not like the kitties. Kitties!

This may be one of the longest reviews I’ve written in a while now! I may keep them this long if I’m only doing the Saturday updates from here on out. In the meantime, check out Housepets! It’s too good to be missed. Really. Updates M/W/F and has a cuteness count of 8.3 on the Button Scale, that means each strip is 8.3 times cuter than a button! (If you’re still using the old (outdated) LOLcat Scale, it’s about a 14).
As always, here’s a taste (courtesy of the man himself) of what you’re missing out by not clicking the linky. Clicky it. 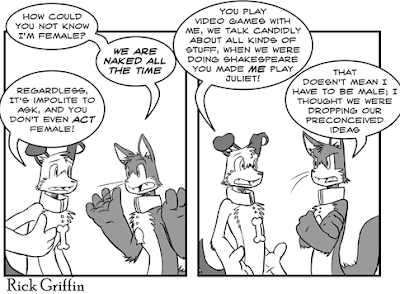 Hey there Coyote, awesome review as always! Props on the length as well, this was indeed quite a long one. And of course the webcomic it was for was excellent as well. Another gem to add to my Update-Watch list! And it's perfectly fine that you're doing once a week reviews now. Sure, I'll miss the two reviews a week, but you're right, you may burn out on comics if you keep up this pace. As long as they're as funny and well-written as your reviews now are, it'll still be an awesome blog!