Webcomics Critique has MOVED TO A NEW HOME over on wordpress.

It's better! Much better!

Check it here for ALL NEW updates, new webcomics, reviews of all your favourites, webcomics news AND special podcasts that are more fun than a nice moist cake.

The new site is http://webcomicscritique.wordpress.com/
Posted by Coyote Trax at 00:51 2 comments:

Wordythinks - Episode One: Get Down on Yourself - A review of Starslip

Greetings all you cheery chirpy people!

Today is a special day, and I don't mean "Olympics" special, I mean "special" special!

I, along with my good associate Alan "Mister Hands" Byrne, have reviewed Kristofer Straub's fine, fine webcomic Starslip. But this ain't any old paper and pen job, no sir. In this age of techno-gwidget-zizmos we done reviewed this in the form of a Podcast! Our weekly new-webcomic review will be posted on Fridays from here on out. Look forward to it.

You can listen to and download the MP3 here, guy: Wordythinks Episode 1: Get Down On Yourself - A Review of Starslip

"Prolific" isn't strong enough a word. Check him out.

See y'all Friday! Peace out.

I’ve come to gain a new appreciation for the webcomic artist these last 48 hours. Mostly because I’ve spent them drawing Monday’s Star Trax while listening to the Halfpixel crew bang on about comics, their webcomics, other webcomics, stuff related to and otherwise associated with webcomics and, of course, Brad Guigar’s insane-o-laugh. The take home message and, dare I say it, “pro-tip” from me is to take regular breaks to avoid cramp, because I just drew in from outta town and boy is my hand tired.

Today’s comic review is of a pleasant story-piece by Istaerlus called “Out Post 7”. I’m not really a sci-fi “nut” per se, but I won’t deny that I’ve seen every episode of Star Trek and Stargate SG-1. Ok, so I am a nut, but at least it’s kept respectfully within the confines of two very good series. Now, if I haven’t already made this clear enough, ‘Out Post 7’ is set in an outpost in space. Please do not get confused with an outhouse in space, that’s an entirely different concept and not worth looking into (turns out alien faeces aren’t that different to ours anyway).

Two of the main influences at work with this webcomic are Star Trek: Deep Space Nine (set on a space station) and Babylon-5 (which I’ve never watched). Being the avid Trekston, I’ve recognised several Trek-related things (not least of which was a Ferengi ship) and promptly mentally chastised myself for being such a big fat nerd. The story follows the staff of this outpost as they get a mysterious new recruit called Ghost. The story pretty much pulls you in from the start and, while it’s still early days for the comic, I’m interested in seeing where it’s going. A word of warning to all you humour forward-slash gag-a-day comic followers, do not expect a punch-line in the final panel. This is a graphic novel type of story which involves humour at times, but that is not the main focus.

Everybody’s favourite part of the review, for reader and reviewee alike, is the art part. We like it because it rhymes. Also because we either get to gawk in horrification, point in humiliation or awe at… awesomification. Fortunately for all involved, it’s never really any of those. ‘Out Post 7’ has an art style that reminds me of what Galaxion might have looked like in its early days. It’s got a realism quality to the cartooning, and aliens’ design and what I call “futuristic effects” (like screens lighting up, etc.) are all well presented.
Story comics should ideally be updated as often as possible to keep the reader hooked, but Out Post 7 adequately relays enough suspense for it to work weekly. The bonus of it being a weekly comic is the amount of time spent on the art and content. You won’t find yourself short-changed, son.
Character facial expressions are most excellent in this comic. It’s a favourite thing of mine to see descriptive and in-depth expressions and Out Post 7 checks that box with gusto. My only critique is that the hands could do with some work. The trick? Practice, apparently. I’ve watched most of season one, but I’m still not getting any better. The shading, crosshatching and use of shadows is impressive, if a little excessive at times. Like I’ve mentioned already, the “futuristic effects” are exemplary. Honestly, I want to know the secret. Here’s an ample example for you to sample: 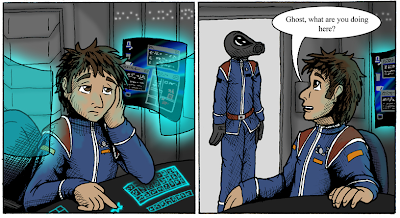 As of today (Monday) there are 15 strips of Out Post 7 for you to sink your wet, gooey eyes into. This should really go without saying when talking about a new webcomic, but I still feel it has to be said. Ignore the detrimental little things like hand drawn speech bubbles and dialogue for the first couple of strips because it very quickly turns into a nice legible typed font with a neat bubble around it. I see this in a lot of new comics and it is in no way a reflection on the quality of the content… Unless the content is crap, obviously. That’s definitely not the case with Out Post 7 and I can see this comic moving from strength to strength in the coming months so it's definitely worth checking out.
Catch it over on DrunkDuck every Monday at http://www.drunkduck.com/Out_Post_7

See you next Monday!

Hey! We update on Mondays now. Just sayin’. This week, I tragically attempted to sign up for Jobseeker’s Allowance. It’s not as bad (read: profitable) as Unemployment Benefit. But, guy, that Social Welfare office is so depressing! And it’s full of filthy, filthy immigrants. I tried cracking a joke and was met with the most soul-draining stare I’ve ever encountered in my 21 years of life and mooching. It was truly a harrowing experience. And I still haven’t gotten my money, consarnit.

So how did I get over this awful, disheartening occurrence? Webcomics! What were you expecting me to say? Meditation? Don’t be absurd. This week’s new webcomic for your front eyes is called “The Pigs Ear” by Craig Munro (not with an ‘e’) which started back in May. I was taken with this comic for two reasons. One: It is set in a pub and, being Irish, I can thoroughly relate to that.

The second reason is something that all new webcomic authors should take to heart, and that is to have an interesting premise for your story. It doesn’t have to be fancy or complicated like the start of a Hitchcock movie; it just has to be enough to give the casual reader a reason to come back. 'The Pigs Ear', as mentioned, is set in a pub. Not just any pub though, ladies and gentlemen, it is a magical pub! I’m kidding of course, that’s a stupid premise. The pub is set in one of those mythological lands where ogres roam the tennis courts and princesses scrounge for scraps in the local tabernacle. This makes for a lot of good story angles (read: crazy shenanigans) and a near-limitless set of potential characters.

The primary setting is the local, where we have our main characters hanging out and drinking like Germans: more or less responsibly. The Barkeep (known only by his job title) maintains order in his domain… Sorry, takes orders in his domain. My bad. His regular is Cyril T. Wizard. Every bar has a regular. Y’know the guy who’s more ‘regular’ than the regulars? Better known as an alcoholic in some circles. Mr. Wizard drives, I’d guesstimate, about 60-70% of the humour overall. This is possibly the only thing I don’t like about the strip. He’s a winner, he never loses. Now I could sit here on my high horse and, smoking a pipe, combing my moustache and launch into a tirade about the evils of the “Mary-Sue” character (think Ethan from Ctrl+Alt+Del) where they represent the author and only good things happen to them. Well, I’m not going to berate the Mary-Sue idea today. For one, I’m not entirely certain it actually applies here. Secondly, Mary-Sues can be pretty good sources of humour and aren’t necessarily a bad thing. They’re just irritating. Like a fly that’s buzzing around while you’re eating dinner and it refuses to go out the window. Then it lands on the butter and starts lording it over you. I hate that fly.

What in the heck was I talking about? That’s right, the humour. ‘The Pigs Ear’ has a nice general sort of humour despite the quasi-fantasy genre. Really anyone can read this, PG-13 as they say. I found the story arc about finding a bartender assistant most excellent, mostly because it doesn’t centre around Cyril. But that’s just me. You’ll find it twice as funny if you aren’t cursed with the ability to deconstruct a webcomic. Really, I ruin these things for myself because it is funny stuff

Moving briefly onto the artwork now and there isn’t much to say on it. Typical cartoonish style and the characters are reflected very nicely in their illustration. I’m very fond of the shading, it’s truly top notch. And I don’t say “top notch” very often or, indeed, at all. I’m impressed verily by it. 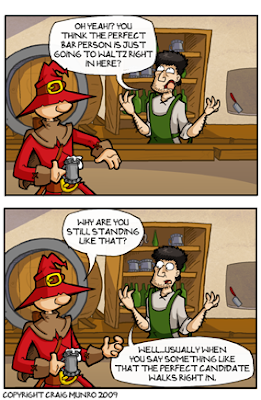 ‘The Pigs Ear’ has found its feet as a comic. The characters are solid, the story is capable of growth, the artwork makes for a lovely read and the humour functions well enough to drive away the Social Welfare Office blues. What more could you ask for? A patented Trax rating? Well, if you insist. I give this puppy a 3.5 out of 5.

It’s worth your time and I can see it moving from strength to strength in the coming years. You can catch it every Thursday at www.pigsearonline.com. By the way, don’t type “pigsareonline” like what I did once. Pigs are online and they do disgusting, filthy things.

Join us next Monday for another thrilling instalment of Coyote Trax’s Webcomics Critique!