A Review of Woo for You!

Hello again, faithful readers. I must begin with the bad news. Due my excessive workload and sleep deprivation, I didn’t get the chance to find and review a really obscure comic this week. That means getting in touch with the artist, asking their permission to use some of their comic in the review (for the taster, chief!) and it usually takes a day or two for them to reply. Anyway, yeah, I didn’t do that. And so! I decided to review a less obscure but no less recent comic. With any luck, I’ll get quick permission to post a picture [I got it, son! - Ed.]. If not… I don’t know… I guess I’ll draw a bad rendering of it? That’s what happens when you cross the Trax! Yeah! Wow that sounded awful once I read it back. “Just the Trax, ma’am.” I need sleep.

So, I’m gonna thank Cameron right now for suggesting the comic Sandra and Woo. If, like me, you’ve seen the advertisements and haven’t read it, then you were missing out on some good stuff! Originally, I was going to review this one in a month or so but, since I read the entire archive in one sitting, I think I’ll review it now. Sandra and Woo is about a young girl who finds and adopts a raccoon, Woo, as her pet. Fortunately for us all, Woo can talk! And he be knocking out the funnies. There are numerous other characters too: Sandra’s father; and her friends Cloud and Larisa; Woo’s friend Shadow, a fox; and Sid, a Squirrel. It’s written by Oliver Knörzer and drawn by Powree, AND it only began in October!

This comic is entirely reminiscent of Calvin and Hobbes. Mostly the writing, but some of the comics are portrayed in a similar fashion to the old Calvin and Hobbes strips, but in no way is it ripping it off. It’s all very original, and very well written. These similarities are usually intentional, an homage of sorts, to the excellence that is C&H, (not Cyanide and Happiness, that’s another thing entirely). So if you’re into Calvin and Hobbes, you will like this strip. It’s full of the witty and inspirational observations!

How can I describe the art work? Well, you can check out Powree’s DeviantArt page and make up your mind with your eyes. Or, you can just check out the comic and make up your mind with your eyes that way, son! I recommend the latter, since it kills two birds with one fantastic stone. Her work is very good, animé-cartoonish, but still retaining a sense of realism for the comic. The strip itself is done in black and white, and is done in very clean black lines. Refreshing! See to believe, chief.

A summary! Sandra and Woo is a good read if you like intelligent humour and cute fuzzy animals. So what the heck are you waiting for, Marty? Go and read it! Updates twice or thrice a week, usually Mondays and Thursdays and one other mystery day (Hint: it’s not Monday or Thursday!) Here’s your taster, guys and gals, have a good week!
Peace and chicken grease.
Coyote “Write-Me-do” Trax 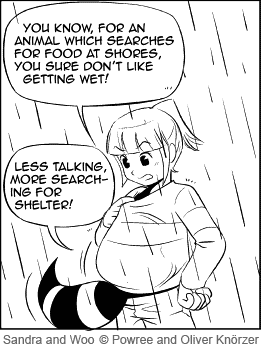 Epic review as always, Trax! And don't worry, we understand if you're busy and can't find obscure enough comics n' whatnot. I hear ya got a real zinger lined up for us this Saturday, though!

Humorous cartoons are difficult to find when you seek blogs referring to a variety of topics, I get very amused when I bump into these cartoons Buy Viagra Cheap Viagra.

youre really a good webmaster. The web site loading speed is incredible. It seems that you are doing any unique trick. Also, The contents are masterpiece. Fotografia A�lubna Katowice youve done a great job on this topic!

Thanks for the nice blog. It was very useful for me. Keep sharing such ideas in the future as well. This was actually what I was looking for, and I am glad to came here! Thanks for sharing the such information with us.

Good luck to you then!